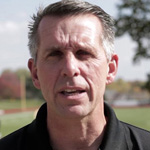 The Elite 11 Soccer summer camp Director, Graham Ford, is no stranger to the game of Soccer.

Graham Ford has been the Head Men?s Soccer coach at The College of Wooster for the last 20 years. While at the reigns of the Fighting Scots program, Ford led the Scots to back to back North Coast Athletic Conference Championships, undefeated regular seasons and at one point a ranking as high as no. 2 in the NCAA Division III.

Coach Ford?s passion for the game goes beyond College athletics as he is very active in the youth soccer community. Ford formerly was the the co-director for Pennine United based out of Hudson, Ohio and has worked closely with Cleveland United and Ohio Premier Clubs. He is also an Olympic Development State Team coach for Ohio North, an NSCAA advanced licensed coach and a USSF staff clinician.

?I have ben running soccer camps for more than twenty years. It is my top priority to ensure that each young player leaves camp not only a better player, but more passionate about his game, ? said Ford.

The philosophy behind the Elite 11 Soccer Camp combined with Coach Ford?s elite coaching tactics will provide your child an unforgettable summer camp experience at the College of Wooster.